Europe Trip: Liverpool & the longest town name known to me

Hey Everyone! I'm finally back in Malaysia, and its busy hectic as I've taken 3 weeks off work, and there's plenty to be done when i returned. Finally have the time to share more on my Europe Trip, so this post is the continuation from Chester.

After visiting Chester, my family & I decided to take a train up to Liverpool! Now all you Liverpool fans can shout YOU'LL NEVER WALK ALONE!! It was about 45 minutes away, and it was only about 8 pounds to travel by train.

We were there for only a day, but I guess it was alright as we were mainly there for Liverpool FC & The Beatles. When we arrived at Liverpool main train station, We hopped on a bus to visit Anfield Stadium! A must for all Liverpool FC Fans. It was about a 20 minute Bus ride up and it costs only 4 Pounds for a bus day pass

After Anfield Stadium, we headed into the city itself. Mom & Uncle Mike was pretty interested in The Beatles "famous" sites, since the group was founded in Liverpool. We started walking around the City in search for these famous attractions!

Matthew Street, Home of The Beatles

Another view of Albert Dock

The Wheel of Liverpool

The family at The Beatles Story

After a day in Liverpool, we drove down to some famous places in Wales. We stayed a night at Llandudno which is a famous beach site. Its a really long bay which is a real great place to unwind. Just imagine, walking on the "rocky" beach from on end to another, and chilling on the pier with an ice cold beer, Bliss!

Pretty warm over there, so I didn't needa zip it all up

That's how long the bay is

Sonya at the pier 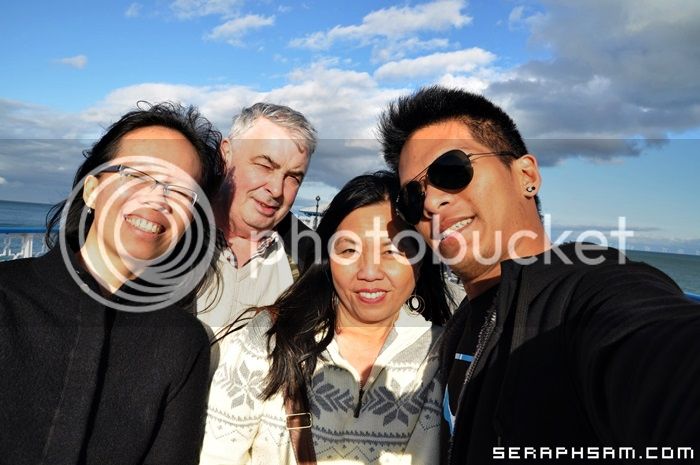 Ice cold somersby by the tap! ain't nothin fresher than that!

The bay by night

Pweety Pweety stars! its definitely amazing as you're able to see a whole sky full of stars at night!

At the end of our trip, we headed to a place that tourist love to joke about because of the length of its name! The name of the town is:

Crazy long yeah? the meaning of the name is actually:
St Mary's church in the hollow of the white hazel near to the fierce whirlpool and the church of St Tysilio of the red cave

Some people really have no idea how to name a town! Haha! But well pretty much its just a very small town with a shopping outlet, but a photo opportunity is a must!

That's how you pronounce it