This is a long overdue post so here it is! I managed to travel to Bali a few months back, and what made it special? It was with my Family! My fam is scattered all over the world, so its very seldom that we have the chance to meet up. probably once a year at most?

This time it was a trip with my mum, step dad and my sister, Sonya.We boarded an Airasia flight over there, and we planned to stay at 2 places. which is Ubud and Kuta. Once we arrived, we hired a car, and took about an hour drive to Ubud

Ubud is a destination away from the city where you'll be one with nature. There's also plenty of temples over there which are rich in culture and history. It has a strong Hindu-Javanese influence so you'll be seeing a lot of God statues all over the place, and there'll be plenty of offerings that are left out on their doorstep each day

We booked a hotel called Sri Bungalows Ubud and it was really spectacular! The entrance would seem pretty small, but there's a garden leading to individual bungalows filled with nature by the side, and also a nice paddy field.

The walkway to the Bungalows

Keep on walking through the gardens

The doorstep of our Bungalow

A bed fit for a king


We soon headed out for lunch to enjoy some delicious cuisine. Indonesian food is somewhat similar to Malaysian food, so we tried out the famous dishes and of course it was nice and spicy!

Some other kinda rice, can't remember the name


Soon after that, we headed off sightseeing at Ubud which included the monkey forest, where monkeys run free, and also the palace and temples around the area. Have a look!

Locals in their daily life

A God with FREE WIFI! 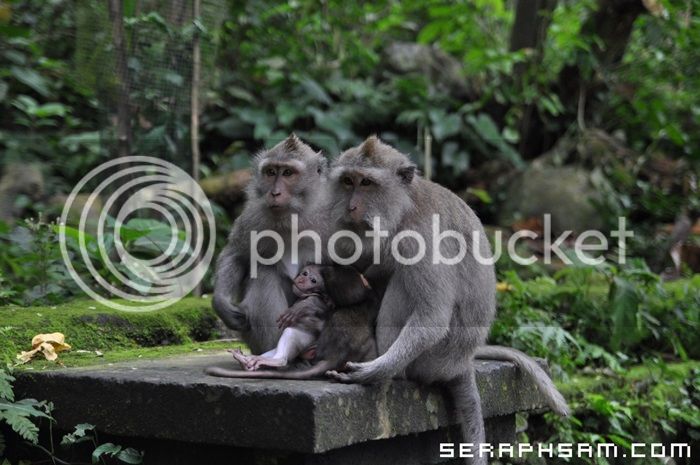 One of the performing arts centre

The Choir of Men

and of course it ended with fire! (just like the Kuda Kepang of Johor)


Continuing with the 2nd day, we started off with some famous food which is the Babi Guling. It is roasted pork with rice, and the most famous of them all is at Ibu Oka. This is something you would definitely want to eat as its damn delish!

Bintang Beer to wash it down

Continuing the day, we headed over to the famous Elephant Cave. Its a place of worship, and its pretty peaceful in there! You would have to wear a Sarong (skirt like thing on your waist) to enter the place, and don't worry as they provide it as you purchase your ticket in. Do not buy it from the vendors outside.

Another rule is. Women on period are not allowed to enter LOL

An altar in the cave

Another altar in the cave

Even the trees wear sarongs!

Bits and pieces of the cave

After meditating (yeah right), we took a drive up to another beautiful scenery that is not to be missed. Ubud & Telagagang Rice Terraces! it took about a 30 minute drive, but it was all worth it as the view was spectacular! You would be able to see farmers in their daily lives harvesting rice on the mountains

Uncle Mike with one of the locals

A coke to chill the day off

Their speciality? of course the crispy duck :)

One of the starters

We headed over to Kuta the following day, but there's nothing much to write about Kuta as it is just a party city. The beach waves are rough so its only ideal for surfing, and the place is just famous for shopping as you can get Polo's for like RM50-RM80 each!

As for the clubs, you'll be able to see dancers with see through tops =D yeah nipples exposed baby! (god i sound like a super perv now) and you can get mushrooms all over the streets. Somehow you'll know its a party city when you can get drugs all over the place. Simple as that.

A funny fact though, a pimp actually came up to me and asked me if I would want any girls. Here's how the conversation went:

LOL  I TROLLED THE Fella


Overall it was a good trip as I was able to get away from the stress of work, definitely was great to even spend time with my family! Thanks Mom & Sonya for organizing this! Love you loads!