Hi all! So I've been to Palawan recently and have talked about the City Tours of Palawan. As for now I'm gonna share about the beautiful places you should visit when it comes to sceneries and nature. Palawan is always known for their beaches, and also for their underground river which is said to be one of the 7 amazing wonders of nature over there.

This trip has been sponsored by Cebu Pacific Air as I'm the Cebu Pacific Juan Blogger Ambassador. Also there's accommodation sponsored by Agoda and also shopping money sponsored by VISA. I want to thank you guys for making it happen! Do read my first Palawan City Tour post here:

So first stop, we decided to go for their underground river tour. We had one of the hotel tour staff to arrange it for us which costed us about 1300 pesos per person (RM100). For those who would want to go, you would need to book your spot a day earlier as they have restrict the number of people/slots going in to preserve the beauty of the place, of if you feel adventures, you can try heading there by yourself by planning your own itinerary and finding your own transport there.

A van came early about 8am where our tour started. Since our permit to enter the underground river was at 3pm, the first place we headed to was Ugong rock which showcases an amazing limestone cave and fun filled activities of ziplining. It was an hours drive away into the mountains and after just napping for a while, We finally reached.

Ugong Rock stands 75 feet tall, and is about a 40 minute hike up. as for the option of going down, you can either hike your way down, or zipline your way done. Of course ziplining would cost a lil more [200-300 pesos more (RM15-25)], but it definitely is the easier and more fun way down. 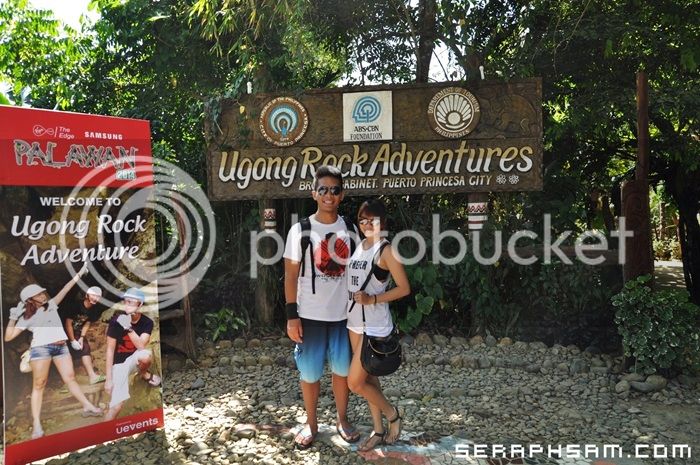 At the first stop

at the cave entrance

The flash blinded my eyes

Eileen on a vine swing

Climbing through the caves

As for the highlight of this part, we managed to do some ziplining! You can choose either the Superman Zipline or the normal sitting down zipline. We chose the superman zipline so we could fly! 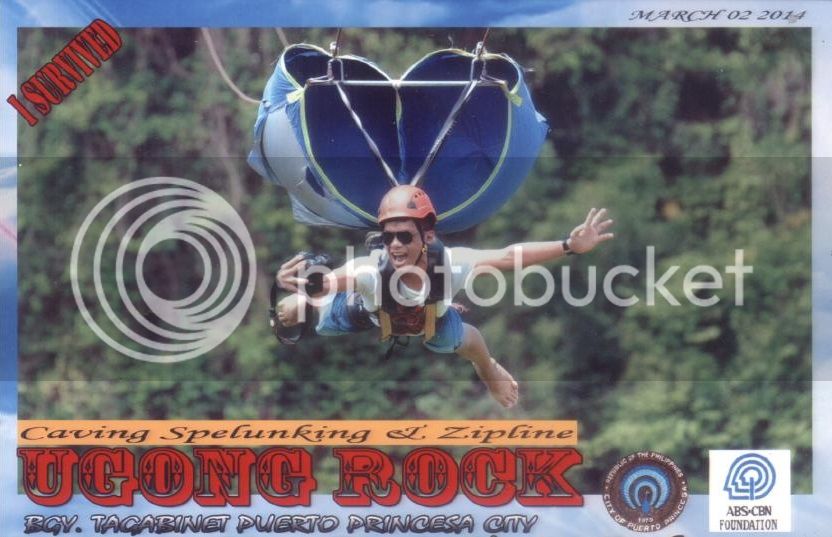 After ugong rock, we headed over to the jetty which will bring us to the underground tour. We took an hour boat ride out to the island, The Underground river tour is unique as we would have to take a small boat through the caves where its pitch black in there. The cave is about 24km in length but we are only allowed  to head in about 4km.

There are plenty of bats there too, so its advisable not to look up with your mouth open LOL

Heading out on the boat

Some monitor lizards on the island

Eileen & I on the small boat ready to enter the cave 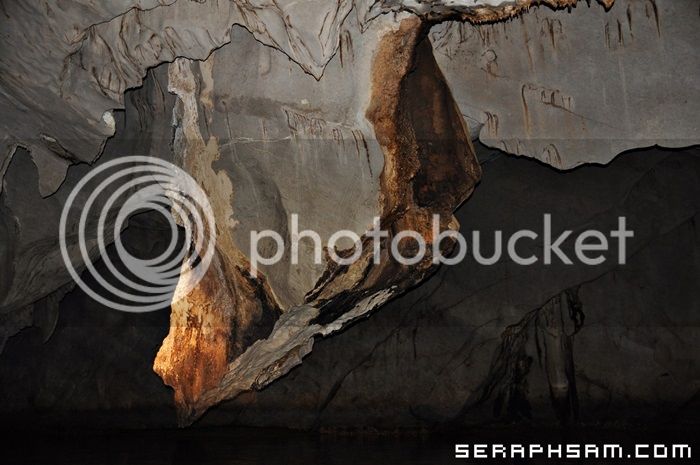 Rock formations in the cave 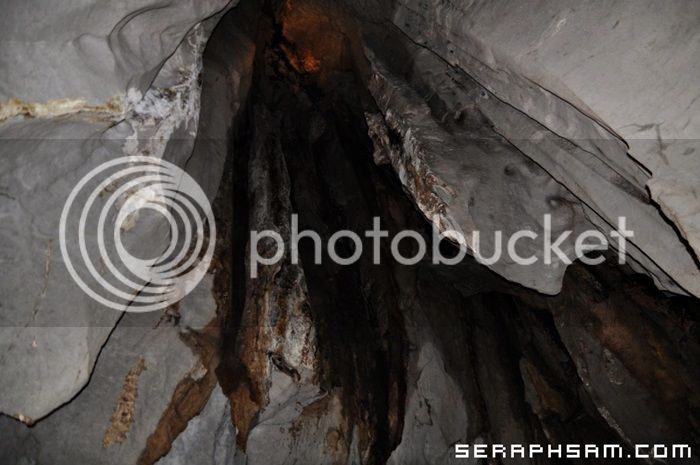 One of the highest peaks of the cave

Bats who are living in those small tiny holes

Can you spot the "head" of a person?

Eileen and I outside the cave


On our way back towards Puerto Princessa, we stopped by Elephant Cave, Karst Mountain. What's so special about it? The Amazing Race took place here! so its another tourist spot where everyone goes just to take a pic with the "Amazing Race" banner


That pretty much sums up another day at Palawan with the Underground River Tour as it is a full day itinerary. As for the 2nd day, we headed off for the Honda Bay Island Hopping tour. There were only 6 of us for this tour, so pretty much we were given full attention by our tour guide. For the Honda Bay Island hopping tour, we were visiting a few islands, which were Starfish Island, Lulu Island and Courie Island

Our first stop, Starfish Island! Ironically we didn't manage to see any starfish over there, and as for those who plan of going there, do rent those snorkelling boots as there are plenty of sharp coral over there

A small shoutout to Cebu Pacific Air for their Anniversary

Our next stop, Lulu Island! What's nice about this Island? its pretty small, and theres an awesome diving board over there! Plenty of chances to do fish feeding over there too!

Chalets around the island

Eileen jumping off the board

Myself jumping off with a little twist

Another guy flipping in

Last stop: Courie Island. Its a great place to chill as there's an open bar and a massage centre! we just had a nice halo-halo and san miguel beer there to chill things off :) 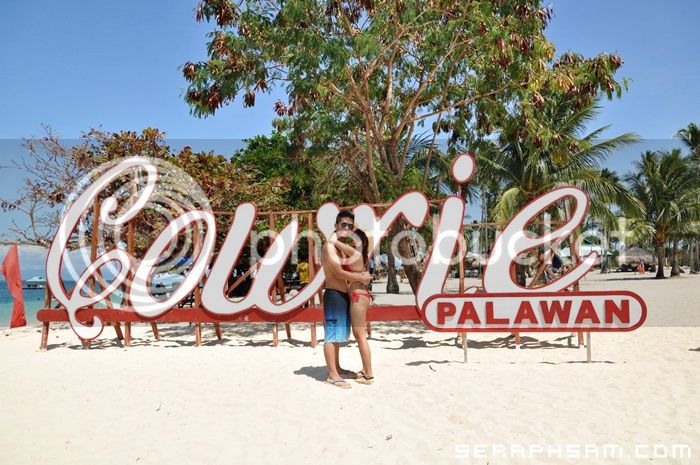 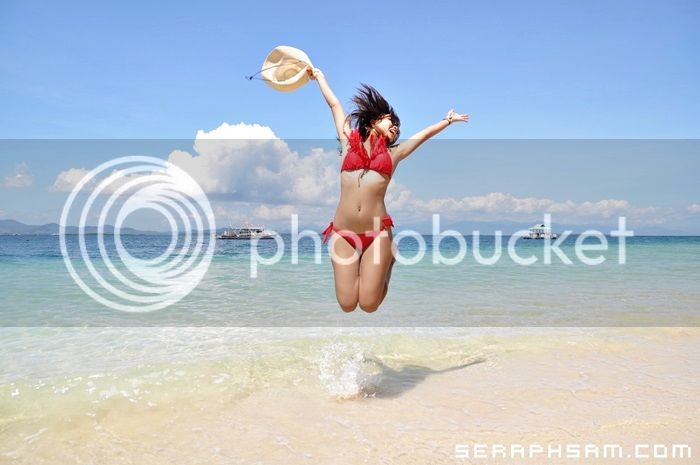 That sums up my Underground river tour and island hopping at Palawan! Once again I would like to thank Cebu Pacific Air for sponsoring my trip there and I can't wait to work with you guys some more!

Read about my other Philippine adventures here:

Ana Jonessy said…
Aww man! What an awesome trip! I'm planning to visit Palawan too and it's so good to read from a visitor's perspective as opposed to reading touristy website! So cool that you got to be so close to nature (and the lizards too eeeep!). Thanks for sharing this out. Guess I'm gonna confirm my booking now.
April 21, 2014 at 9:26 PM