The long awaited Samsung Galaxy S5 is here! with new gear with it!

on March 29, 2014
After a great wait, the Samsung Galaxy S5 has arrived in Malaysia. The launch was held at Pullman Hotel, Bangsar and there was quite a big crowd of Media, Bloggers & Friends who attended it. One thing I like about Samsung? They're PUNCTUAL and theres no such thing as Malaysian Timing there!

The Galaxy S5 is priced at RM2399, and its going back to basics to focus on delivering the capabilities that matter to most of the consumers.Whats new with the S5? There's an advanced camera, fast network connectivity, dedicated fitness tools and enhanced device protection.

The thing that appealed the most to me is the camera & faster speeds. As for the camera, it now comes with a 16 mp camera with an enhanced menu and user interface with a faster autofocus speed of up to 0.3 seconds.There's also a new selective focus feature which allows users to have the "Boukeh" or "Shallow depth of field" effect on their pictures. Cool huh?

As for the speed, The S5 offers the most advanced LTE experience and WiFi performance available today. It also comes with a new Download Booster, an innovative WiFi technology for boosting data speed up by bonding WiFi and LTE simultaneously! So streaming and downloading wouldn't be much of a problem now!

The Galaxy S5 is also IP67 certified which means that its dust and water resistant! wouldn't be too scared of running in the rain now yeah?

There are 2 colours available currently which are the Charcoal Black and Shimmery White. As for other colours coming in soon, it'll be in Electric Blue and Copper Gold. 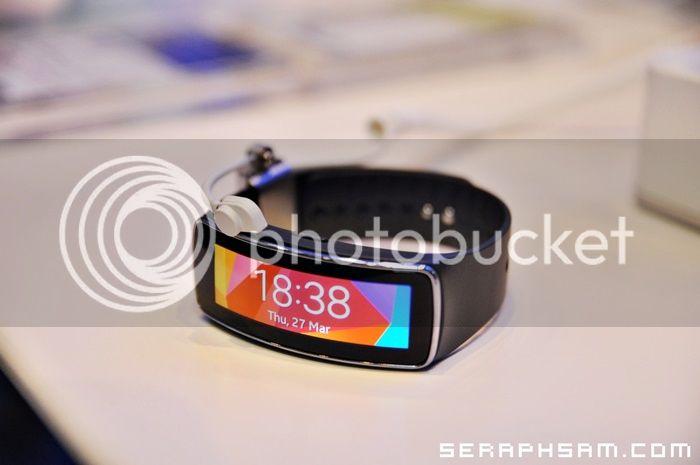 The Galaxy Gear Fit which comes with a curved AMOLED Display

They'll be available at Telco companies such as Maxis, Digi and Celcom soon! Go check it out!