on February 15, 2014
Continuing my previous post of my Krabi Trip, After heading to all the Islands, We decided  to head up to the mountains! We signed up for a tour which comprised of visiting the Hot Springs, Emerald Pool & Tiger Caves Temple. The van picked us up early in the morning where our first destination was 1 hour away.

Our first stop was the Hot Spring Waterfall. One thing I realized when you sign up for tours, you literally have to walk quite a bit as its quite a far bit from the car park up until the location itself. As for the hot springs, we took a 5 minute walk and we finally reached the waterfall

Enjoying a nice cuppa coffee after the dip!


Next stop, Emerald Pool! Its a pool which has crystal clear water and is Emerald in colour! This is long walk from the car park as its about 1km from the car park to the Emerald Pool. What's bad, there's only 1 hour allocated for Emerald Pool so we didn't swim in it, but instead we took another route to reach the Blue Pool which was another 1km away through the jungle!

The stream leading from Emerald Pool

This is the beautiful Blue Pool. You can't swim in it because its deep and has muddy grounds which will drown you if you sink 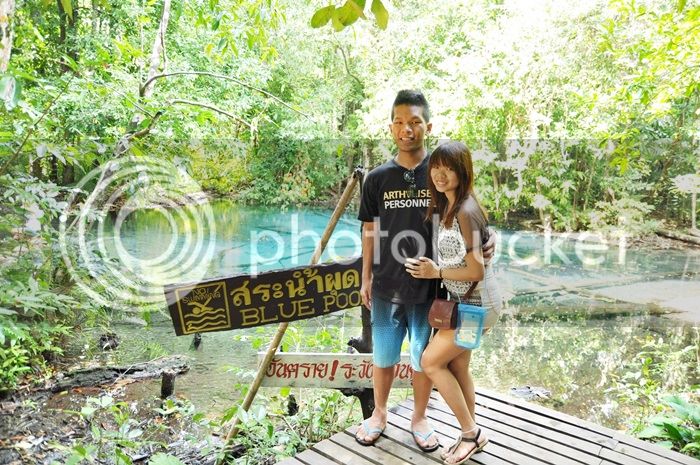 We then had lunch at an Elephant trekking centre. We didn't sign up for the Elephant course as well, I've rode plenty of Elephants and there's nothing much to it. So in the end we just had lunch near the place. The food was good as it had some of the famous Thai dishes which weren't too spicy to cater to the ang moh taste.

The beautiful view at the makan place

Our table for four LOL

The last stop was Tiger Caves Temple itself. Why do they call it Tiger Cave Temple? I do not know, they should have called it Monkey temple or something because there are dozens of monkeys roaming around the temple.

The highlight of the temple is the 1,237 steps to the top of the mountain. Eileen and I were up for the challenge even though we are physically unfit haha. Believe it or not, its a crazy climb up those stairs and we were really dehydrated at the middle of the climb, but luckily when we reached the top, there was filtered water ready to drink. Enlightenment!

Some tiger we found at the temple

The happy face before climbing the steps

A monkey and its baby

The view of the temple at the middle of the steps

and finally we reached the top to see this giant Buddha

The view from the top

and of course after climbing all those steps, we did a lot of crazy shots as per usual :)

Well thats all for my Krabi Trip, it has been a blast and definitely would love to go there again soon!