on December 24, 2012
If you have no idea who or what is Techduology, It is the combination of Ben Jern from Fly FM & Jason "SmashpOp" Goh which brings you reviews and latest happenings in the Tech World!  Combining their passion and enthusiasm together, they become one of the most powerful duo's you can think of! You can check them out at www.techduology.com!

bringing about 150 people together to crowd into Starbucks at Taylors University, their show was done live where we could see how it all goes around in their world. of course since its live, There were plenty of "bloopers" in the midst of the show!

I would say it was a crazy time as Techduology was so generous in their giving! its truely a season of giving this time of the year! and i'm very thankful of it as I also received an awesome starbucks mug from them!


Lets start up with some pictures:

The awesome crowd at Techduolive!

Splendid food for the crowd!


The whole show was about 3 hours and i would categorize it into a few sections. The main highlights of Techduolive were such as:

Other than that, there were also reviews on such as the Sony headphones, the new Nokia Lumia Casetagram, and much more! They shared their insights on the products to us and we were able to feel, touch and experience the knowledge and fun they knew about it!

The Sony Smartwatch is good to go with any Android phone *sorry apple you're losing out on this* and basically:

In terms of Android Remote
- you're able to download your smartwatch apps from the google play store. Plenty to choose from! Think of the possibilities!
- You're able to control your Music Player of your phone from your watch!

The different faces of the Sony Smartwatch.

The smart watch is also detachable, so you can clip it on your bag, or collar, or whatsoever!

Lucky draws were done time to time at Techduology live where awesome prizes were given out to the guests that attended it. Prizes were such as Sony headphones, Starbucks Mugs, Puma T shirts, and much more!

Ironman receiving his sony headphones during the lucky draw!

Starbucks guy getting his *pink* sony headphones. God knows what he's gonna do with it LOL

As Techduology live was going on, there were plenty of contests that were happening! most of them utilizing twitter, facebook & instagram where guest would need to complete tasks that were given by Jason & Ben Jern

other than that, there was also a contest that was held in the previous episode of Techduology and the winner was announced on that day from the loudest cheers of the crowd! 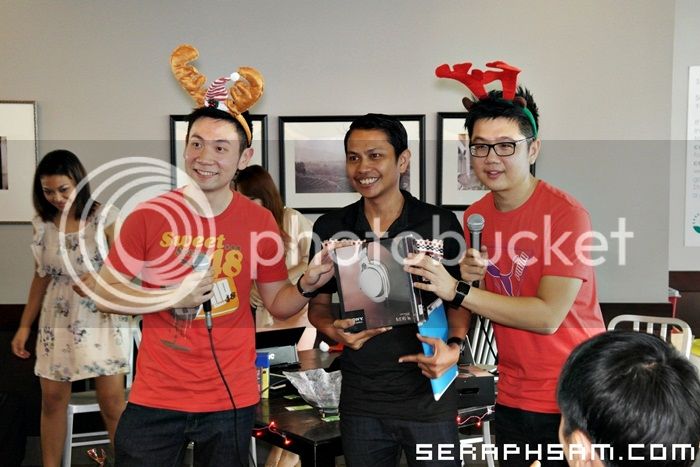 The lucky winner of the Online contest which got him a new pair of Sony headphones worth RM1,000!

Ewin being the lucky winner of Nokia Lumia 920 contest where he got himself the phone itself!

Jessy being the lucky winner of the Line contest which got her an exclusive Line Doll!

Sing Yi being the lucky winner for the twitter contest which got her a 2TB Hard Drive!


As the event came to an end, I would say that everyone was happy with Techduology live! it was a huge success, and of course with all the prizes given out, even I'm a happy man =)

as the last picture for this post, it is none other than:

One thing for sure, Techduology has been awesome this year, And there is much more to come the next year! I can't wait for more awesome stuff from them! stay tuned to www.techduology.com !
ben ben jern bloggers bose line Puma reviews smashpop sony starbucks taylors techduolive techduology techduology live western digital

Isabel said…
I was there!