Courtesy of Carlsberg Malaysia, I've been given invites to attend one of the biggest parties of the year. Basically, Carlsberg's Wheres the Party is a mystery as no one knows where the location of it would be till the day itself.

A meeting point is set up at the Shah Alam Stadium where the invited guest will register there, get into a bus and will be transported to the secret location of the party. As for this year, Carlsberg has raised the bar by hosting the party for more than 2000 party goers.

As for this event, I invited Sydney along as she used to work in the previous Carlsberg Wheres The Party the previous year at Sepang Gold Coast. We headed over to the Shah Alam stadium with Chung & Evon and things started to get hyped up there!

The crowd at Shah Alam Stadium

Evon, Chung, Sydney and I

after about 2 hours of waiting & getting through the registration, We finally boarded the bus with the rest of the bloggers to the secret location. We had a great host which was Aster Kyle G, during our bus ride which answered most of our questions, except for the location of course, and basically had a lot of laughs with him

After a 30 minute bus ride, we finally arrived at the location, and was pretty bummed as it was actually the Carlsberg Malaysia Factory. Expectations dropped drastically as the previous year was the bomb at Sepang.

But well, All we could do now is to try to enjoy the party. get the free beer and try to win goodies from Carlsberg. 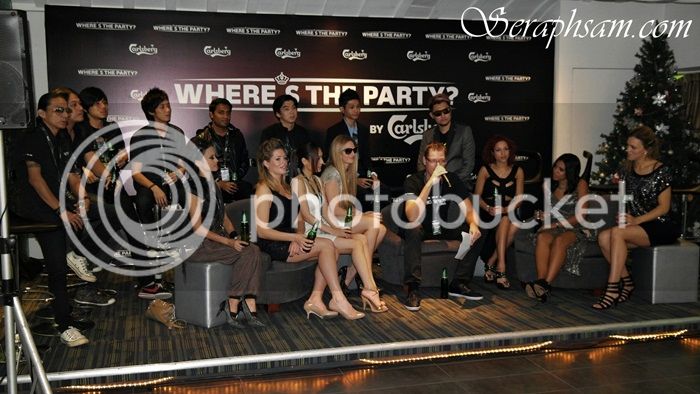 We headed over for the press conference located at the Carlsberg Lounge where we got to know whats in store for us. We had an opening speech by Carlsberg Malaysia's Director Mr Soren Ravn and he introduced the artists to us. The artist that were performing that day were Dennis Lau, Shawn Lee, Famous Korean Star Lee An,  World Renowned girl band "High On Heels" and DJ Sophie Sugar & DJ Hiloco

Basically as for this year there is an eclectic mix of exciting games, fun rides and free flow of Carlsberg beer. The party incorporated an amusement park theme complete with rides such as a ferris wheel, pirate ship and an adult carousel. Other traditional fun fair booths also were included such as Ring a Green, Toss & Score, Duck Hunt, Our Holes your balls & Wild wild west

And well, After that was a whole day of cheering and drinks on the sidelines!

Lets get to more pictures of the day:

Ferris Wheel in the amusement park

Samantha getting a go at ring a green

Foot massages for all!

As night came, It finally came time for the performances for the night. I didn't get much pictures for it but well, Here are some of the pictures of the night

The singer & the sax player

Compilations of the last pictures of the night

honestly for this party, It was kind of a let down as it couldn't beat the previous one at Sepang Goldcoast. The hype wasn't built up nicely during this event and it could have been better. But well, we have to give Carlsberg a hand for creating this party

All we can hope for is that the party next year will be much better!