The Sa Sa Colours & Fragrance Fair & Awards
2010 Presentation Ceremony was held at Sunway Pyramid Shopping Centre on the 1st October 2010. This event was attended by plenty of people from celebrities to media to celebrate the awards presentation to the winners of the 6 fragrance categories voted by the Malaysian consumers
Sa Sa Colors & Fragrance Fair & Awards this year has attracted trade partners such as DKNY, ITF, L'Oreal PCI, P&G Prestige and Marina De Bourban with an awesome line-up of fragrance submissions. A total of 38,436 votes were received this year from all Sa Sa outlets!
The panel of judges comprises local celebrities such as Amber Chia, Sazzy Falak & Nazril Idrus, Awal Ashaari and Owen Yap, contributed 40% of the points to the winning fragrances, the remaining 40% was contributed by the general public while the balance 20% was obtained from the results of fragrance sales tabulated.
Lets head to the pictures that day: 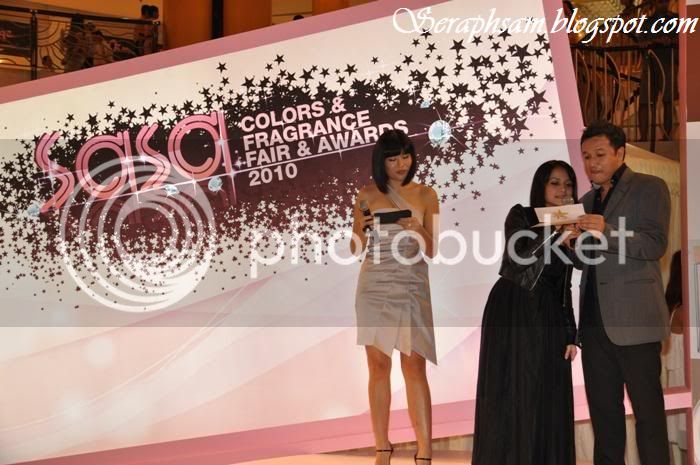 The Judges announcing the fragrances

The models displaying the perfumes for the last time

And as for Sasa, They gave back RM1 for every bottle of fragrance sold during the campaign to the Breast Cancer Welfare Association (BCWA) with a total or RM 13,389!
and as the event came to an end, There were just plenty of photo taking amongst everyone

Group Pic of Bloggers
and the last picture: The people that made it all happen!