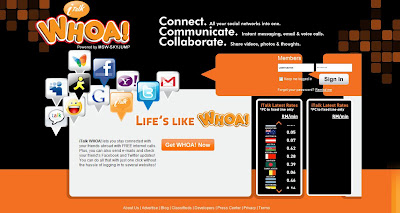 Italk Whoa is one of the latest packages which is offered by Tm. If you havn’t known about it, You can check it out at www.italkwhoa.com. It is a platform which you can do almost anything on in such as using Instant messengers, calls, twitter, emails, organizers and much more.

I’ve been using it for about 2 months now and I can say that the ItalkWhoa is quite an awesome package and I would like to highlight its IDD features. I’m able to call other countries and also do local calls at very cheap rates. It is really good as I’m able to contact most of my friends at Australia and also Singapore at really good prices. The Charging block is per 20 seconds so you wouldn’t need to worry on very short calls.

If you would like to know about the rates, Here it is:

You can give it a try as it is a great platform to reconnect with the long lost friends and also it is considered the most affordable one too.