on July 14, 2009
Digi with nuffnang has organised a contest called
MMS Speak up Malaysia
this contest is only for Digi users
You're supposed to snap a picture and mms it to 016-6029778
with your caption
you can snap any type of picture..
there are some entries from other people
about school..cars..alcohol etc etc
You can view the pictures here
The prizes includes
Cash prize of RM3000
GSC movie passes
Ipod shuffles
LG Cookies
well i supposed to do this a long time ago
but i was quite busy with stuff
so anyways
my picture that i snapped and mms is: 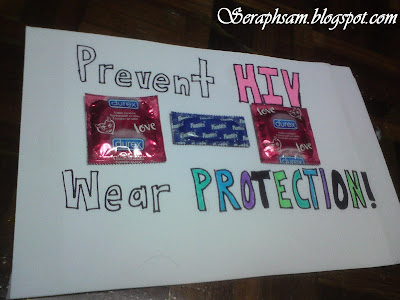 Well everyone knows
my mind always revolves around sex content
I created this
because it is a very big issue and
because this is very important for the citizens of Malaysia
since the numbers of HIV patients in Malaysia is constantly increasing
as everyone knows
HIV is a virus that CANNOT be cured
it will attack the human immunity system
and leaves the host open to attacks of other viruses/bacteria
A serious attack of HIV will often lead to AIDS
where many have already died from it
HIV is often transfered from a person to another
by Sexual intercourse
such as Oral Sex, Anal Sex, and Normal sexual intercourse
so since HIV can't be cured
it only can be prevented
by using a thin layer of latex (condom)
it is able to trap the semen/vaginal fluids/blood with HIV
from the host to the other person
so by just using a condom
it'll ensure that HIV can't be transfered from a host
to another person
By using a condom:
1: Numbers of HIV patients in Malaysia will decrease
2: Death rate in Malaysia will decrease
3. It'll protect the non infected person
4. It will create healthy and safe society in Malaysia
so i just want to speak up and say
PREVENT HIV!! WEAR PROTECTION!!
-outz-
contest digi nuffnang speak up

erin wong said…
I love ur blog. Its so biatchy!!

And FYI, recent studies have confirmed that men can prevent HIV from hitting their system if they snip snip off their foreskin. ie. circumcision.

This doesn't stop the virus from being transmitted to ladies tho. Hmph.

Samuel C said…
HAHAHA thx =)
i write alot of crap in this blog though lol...