on March 07, 2008
FRIDAY
7th MARCH 2008
today i had sudden last minute plans made
actually i was veri tired and stressed since yesterday
and this morning..got early wake up calls..
which really bugged me..
anyways so i woke up about 11.30...
and went to Pyramid to meet up with Sherry
Tieng Wei supposed to come too..
but then she woke up late and also got some editing thing to do la
so its left me and Sherry
went to watch step up 2 again..
this show is worth watchin..
so watched it again la lolxz...
another thing..its amazing...
as i met up with so many people today haha
Sherry was like trying to count the ppl i knew hahaha
anyways i saw David and Melody
man its super long since i've seen Melody..
nearly a year haha...
and i met Mon Wei, Brandon, and the rest...
so its kinda a lot of ppl at pyramid today 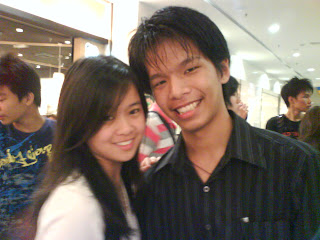 Melody =)
so anyways...
after that Me and Sherry took off for lunch at Manhattan Fish Market
had the grilled platter for two
which i couldn't finish the chips hahaha
and then we went to walk walk
this time Sherry didn't want to spend anything lolxz
*surprised*
anyway i bought 2 tie's for myself...
my shirts dun hav lol...so bought 2 new ones
we went to the Honda Showcase for their racing team
i'm super angry as...there were 4 models
2 were taller than me...1 same height..and 1 shorter
2 were taller!! argh...
must be the 3 inch heels
Sherry went goo goo gaa gaa...
saying the 2 tall ones look hot...Sherry dont turn bi T.T
I met up with Kooi Chin, Baezil and the rest
BAEZIL!!!!
happy? i wrote ur name =) lolxz
so we walked walked and Baezil got gay over me...
scary T.T lolxz
anyways after that they went archery...
me, Sherry, and Kooi Chin jus sat down while the rest played...
and,...there was dis girl...she was bending down to pick an arrow that dropped...
OMG SHE WORE A THONG SO HIGH
we kept on laughing like crap haha....
after that we left our separate ways...
I met Candice as i was going off
kesian her no transport back as Eric's at Indo..
i hope u found away back T.T
so then me and Sherry went back..
tonite i'm gonna pengsan again soon
super tired again haha..
-outz-
pyramid